We went out fishing on the Truckee River on Saturday, September 14th. Beautiful, clear morning – got out onto the water by about 7:00am. The water was unfortunately incredibly low, so it was difficult to find pockets of fishable water. We ended up pulling off just south of the Alpine Meadows turnoff on Highway 89 between the lake and Truckee and found a few reasonably good spots. We used dry flies and caught a few beautiful, but very small – 4-5 inchers – trout. All in all a beautiful morning but not the best time of year to go, particularly during the drought we’re having out here.

Absolutely nothing to report here other than two conversations with the Fish and Game folks.

First conversation was two weeks ago at the launch ramp at Santa Cruz Harbor, it went something like this:

“Hey, has anybody reported any salmon caught at all around here today?”

The young girl (maybe 18) looked at me like I was asking her if she had seen Elvis walking around earlier.  Seriously, I knew right away that there was nothing to report at all in terms of fish being caught.  She said she hadn’t heard of or seen a single salmon caught out of Santa Cruz harbor in weeks.

Pretty much the same deal for the older Fish and Game guy I asked last Saturday.(He was one carrying a guy).

He told me the fishing was absoultely zero down this way but according to the pre-season speculation from the scientists, the fishing was to pick up come the second half of the season.  So maybe that will pan out.  Until then, no salmon out of Santa Cruz unfortunately.

What a great way to spend the day yesterday.  Fishing for some nice brown trout in the pretty sweet Browns River, Vermont.  Just south, like a few hundred feet from the covered bridge, my wife and I purchased some worms, and then headed down to where the fire engines fill up their tanks from the river.  There is a big parking area a few hundred yards away since you can park where the big bend in the river is, but the walk is literally three minutes.

I started off with throwing in a small cast master lure and on the very first cast a small brown trout took a snap at the lure.  I did not hook up, but a few casts later across the sixty or seven foot wide river, I had a nice 10 inch brown on the line.  My wife was watching and yelled at me to throw it back since it was so small, and that’s what I did.  But, the next fish was just about the same size as you’ll see in the video, so kept that one.

I found out about this place from the two super nice Fish and Game officials.  We had run into them a few hours earlier and I asked them where the heck to go to catch some trout, and one of the guys told me this was the spot.  He said it had been stocked really recently with fish, and there was a great chance of catching something.  And, the best part is its literally on highway 128, so you can’t miss it.

After about an hour or so, a father and son showed up and stood right next to me.  They were pretty nice folks, locals for sure and not too grumpy that an out of towner was fishing on their turf.  The dad made it seem that he was going to show me for sure some fish right away, but as it turned out, I caught a fish while they were there and they caught ZERO.  So, just saying, no need to try to big shot anyone, its just fishing after all.

As for Vermont in general, what can I say.  There is an endless supply of rivers and fish to be caught.  Tomorrow we will be heading east to the more remote parts of the state and probably going to find some more trout. 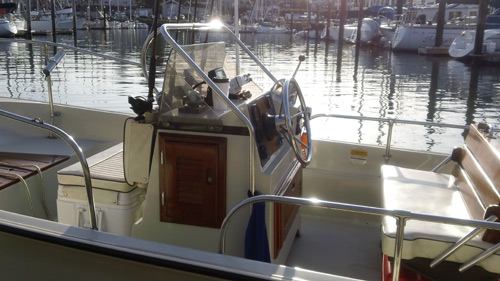 Fishing for just about everyone on the first day of the salmon season was not nearly as good as the expectations.  Depending on where you were caught fishing had quite a bit to do with your luck, but for the most part, the majority of the anglers who fished off Santa Cruz, CA came back into the docs in the early afternoon without a single fish.  It was a shame in some ways, but the good news was the weather was pretty darn good for everyone.  There was plenty of sunshine, and the wind and the waves were not too out control.

To give a better idea of the sea conditions, for most of the boats who left before six o’clock Saturday morning, the stampede to the fishing grounds out near the Soquel Hole were just about flat.  Maybe not like a lake, but the ocean was very calm and was a great way to cruise over the ten mile run at the start of the season.  Later in the morning, the winds started to pick up a bit, and the currents started to play a part in the fishing, but overall weather was not a factor on day one.

Most fishermen were trolling around, pulling both hoochies, spin baits, and dragging dodgers and flashers as would be expected for an opening day of salmon fishing.  It was estimated that over 250 sport fishing boats left the Santa Cruz, CA harbor on Saturday in search of the salmon, and less than 85 salmon were reported to be caught come late evening.  There were some reports on undersized fish being released, however its very hard to verify those numbers.

As the fleet was fishing the area known as “The Hole”, much of the water is deeper than 250 feet, and there again were varying reports of the depths where fish were taken.  Some fish were said to be caught below the 150 foot mark, and some others were reporting fish quite a bit higher.  One thing that was for sure were the complaints of very large schools of jellyfish in the area.  The jellyfish are not usually a major problem, but they can definitely turn your baits into a cluster mess of jelly and the jellyfish can also get all tangled up in your down-rigger gear.  Just one of those nuisances of salmon fishing, but not the end of the world.

As for how we did, well, I’m sorry to say that we did not even get a single bite this opening day.  We did our usual mooching, which was droppin down to 100-200 feet some sardines that were threaded up with a nice hook on the end.  Depending on the time of day, we were using between 2-4 ounces to get everything down as the currents were changing rapidly, but that method produced no luck for us.  Many boats were passing us all day long with their trolling gear, but we did not even see a single net get dipped into the water.  So, quite strange to say the least.  Not what was expected, but maybe it was just us, and others had some much better luck farther up or farther down the coast.

Good weather was a great treat, and we’ll all be trying for some salmon again real soon.