Saturday’s opening day of the long awaited Salmon Season for everyone in California was a great time no matter how many fish were caught big or small.  Not only was there relatively few problems reported, but the fishing turned out pretty good for most anglers.

As expected, the best salmon fishing and fish numbers that were reported was from Santa Cruz Harbor, where boats had on average just under 1 fish per person.  Considering how many boats were launched at the boat ramp and the number of local boats from the harbor that fished, it was quite incredible!

The overwhelming majority of salmon were caught at the Soquel Hole, which is just a 25-30 minute run from the mouth of Santa Cruz harbor.  The salmon were caught in depths of between 230 feet and 290 feet of water, and most of the actual fish were picked up between depths of 80-200 feet.  The most common fishing gear used to catch the salmon for opening day was a trolling rig made up of a salmon dodger or flasher, along with a hoochie which looks like a live squid.  Many of the fishermen reported large amounts of un-digested squid in the stomachs and intestines of the salmon they were filleting at the fish tables after wards.  Another common trolling setup that had success was dragging a dead sardine at slow trolling speeds of 2-4 knots.

In other parts of the California coast, the salmon fishing seemed to also be decent.  Many of the San Francisco Bay fleet headed north to Duxbury Reef for mixed results and the Half Moon Bay fleet also had some mixed results with occasional reports of large salmon taken. 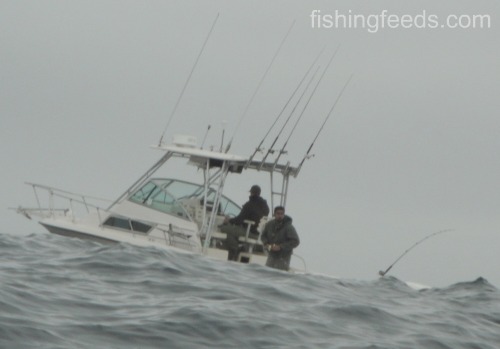 The weather was slightly rough at different times of the day.  The wind would pick up at times in the early morning and then die off again and repeat that cycle.  The seas were  by no means calm, and large rollers up to 7 feet were reported.  Towards the end of the afternoon, the seas appeared much more calm compared to much of the early daytime, which is abnormal for this time of year.

Overall, the opening day of the 2011 Salmon Season was a big success with great fishing and few issues.  Sunday’s fishing should bring back some great stories as well.

This site uses Akismet to reduce spam. Learn how your comment data is processed.